New York, NY, November 3, 2015, Marilyn Haft, Attorney at Law, has been recognized by Elite American Lawyers for dedication, achievements and leadership in legal services for the digital age.

As a woman in the field of law, Ms. Haft has spent nearly five decades establishing her dominance as an expert in politics, government and entertainment law. In her career, she served the Carter Administration as an associate director of the Office of the Public Liaison in the White House and as deputy counsel to vice president Walter Mondale in the White House. Additionally, she worked as a consultant for the NBC News and ABC News, where she lent her legal expertise to a number of Peter Jennings’ Specials. Behind the scenes, she also produced a number of independent films, including the Emmy award-winning documentary on Preston Sturges for “American Masters” on National Public Television. Passionate for all things creative, Ms. Haft authored several non-fiction books regarding human rights, business and the arts.

Driven by her passion for the law and her interests in the government and national television, Ms. Haft has curated a career unlike any other. In recognition of her professional excellence, she was named Top Female Professional by Worldwide Branding, earned a Super Lawyer Award from the New York Times and she was selected for inclusion among the Top Woman Attorneys in the country. In the years ahead, she will continue in her current work with the UN. 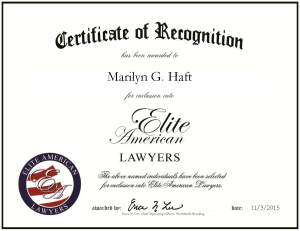