When Mr. Bender attended law school, he was not sure if he would ultimately practice law or use his newfound education degree for business purposes. Upon graduation, he found his true calling in the legal arena, and has celebrated continued success since opening his practice. Even after a career spanning more than five decades, he still enjoys what he does and intends to remain on his current path. His primary responsibility with practice is serving clients as a divorce and matrimonial attorney.

He earned a JD from the New York University School of Law in 1964, and a Bachelor of Arts from Cornell University in 1961. Mr. Bender is admitted to practice in Florida and New York, as well as before the United States Court of Appeals for the Second Circuit, United States District Court for the Eastern District of New York, United States District Court for the Southern District of New York, United States Tax Court and Supreme Court of the United States. He is highly-regarded for his work; Martindale-Hubbell considers him a Top Rated Lawyer in Family Law and an AV Preeminent Attorney as of 2015. Mr. Bender has maintained his title of Super Lawyer from 2007 to 2015. In 2012, 2013 and 2014, he was rated one of the Top Attorneys in the Westchester Area by Westchester Magazine, and in 2012, he was listed among New York’s Top Attorneys by New York Magazine. Mr. Bender is the former president of the New York Chapter of the American Academy of Matrimonial Lawyers Board of Governors, where he served from 1999 to 2001. He is affiliated with the American College of Family Trial Lawyers and the American Academy of Matrimonial Lawyers. 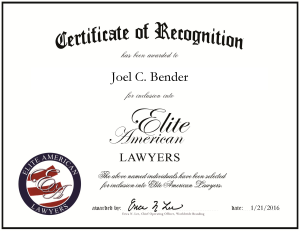