Steven J. Sico didn’t always intend to be a lawyer. He began his professional career as a social worker after graduating with a degree in psychology from Seton Hall University. When his friend, a congressman, suggested he go to law school, Mr. Sico started considering an alternative career path. Mr. Sico went on to earn a JD from The City University of New York School of Law in 1997, and was admitted to practice in New Jersey in 1997 and in New York in 1998. His law firm, Law Office of Steven J. Sico, P.C., provides quality legal services in the areas of family law, bankruptcy, personal injury, real estate, foreclosures and employment litigation. Mr. Sico focuses on complex cases within the areas of bankruptcy, real estate transactions and litigation.

Mr. Sico has been recognized for his work numerous times, including being named to America’s Registry of Outstanding Professionals and Strathmore’s Who’s Who of New Jersey Lawyers. He also won a Client Distinction Award from Martindale-Hubbell in 2015 and was listed in The Italian Tribune’s Most Distinguished Americans of Italian Descent in 2008. 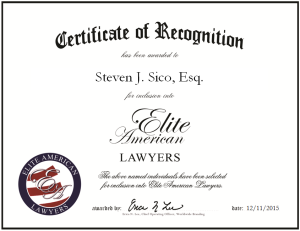