New York, NY, January 26, 2015, Norman Solovay, Partner and Founder of The Solovay Practice, Mediators + More, has been recognized by Elite American Lawyers for dedication, achievements and leadership in collaborative law.

Mr. Solovay found his current career path through his military service. After college, he joined the Army where he was assigned as a law officer for psychological warfare. That got him interested in being a lawyer. Once in the industry, Mr. Solovay noticed growing concerns about mediator quality once the field began to rapidly expand, accompanied by growing concerns about mediator quality, including whether mediators should be required to have substantive knowledge about the specific matters in dispute. Mediation-Plus-More is an umbrella organization founded by him and a long-time associate Mark J. Maged, to address those concerns. Mr. Solovay’s 52 years of experience, along with his extensive practice of alternative dispute resolution, mediation and collaborative law, enables him to successfully run the company while also contributing to the legal field in various ways.

A Lexis-Nexis AV Preeminent attorney, Mr. Solovay has written several articles, including “The Future of Collaborative Law,” “Why a Uniform Collaborative Law Act,” “Responding to the Call for Alternative Dispute Resolution,” “Teaching an Old Law Firm New Tricks,” and “Why Are Some Law Firms Beginning to Promote Settlement Expertise at the Expense of their Litigation Revenues?” Additionally, he has given dozens of seminars and presentations. Mr. Solovay was admitted to practice in various courts, including the U.S. Supreme Court, the U.S. Court of Appeals for the Second Circuit, the U.S. District Court for the Southern District of New York and all New York state courts. Mr. Solovay has been able to excel in the legal field over the past century because he received strong support from his parents. 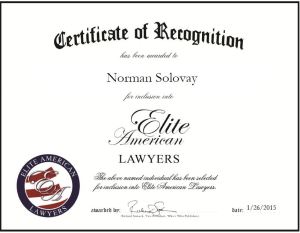